“Meenakshi has not refused to pay her artists, there is just a little delay of payments,” claims Babubhai Thibha, Chairmen IMPPA. 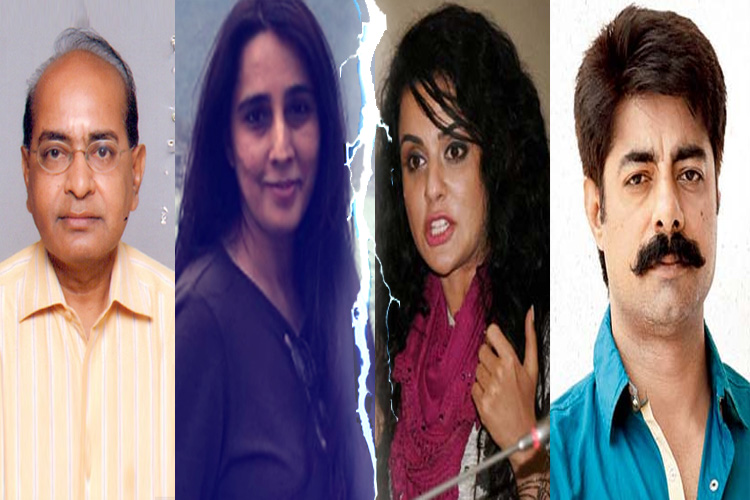 Looks like the Meenakshi Sagar V/S Jamai Raja actors saga, is not going to end anytime soon. First, it was Meenakshi, who sent CINTAA (Cine and TV Artists Association) legal notice for issuing a non-cooperative’ directive against her and demanded an apology.
After that, actress Sara A Khan revealed about going legal against the Jamai Raja producer for non-payment of dues, stating that the cheques that Meenakshi had issued had bounced. Post this, Meenakshi revealed that Sara was lying (she sent us screenshots of messages to CINTAA head Amit Behl which revealed that Meenakshi had successfully made her payment to Sara).
And now, Meenakshi’s Lawyer Rizwan Siddiquee has stated the following, “The allegations made by Ms. Sara Afreen Khan against my client Ms. Meenakshi Sagar before the media, are largely false and misleading. Ms. Sara Khan has received sufficient payments through RTGS, however she has refused to return the cheques of the amounts which are legally not due to her. Instead she has also chosen to give false and misleading statements to the media to interalia defame my client, therefore my client, to protect her legitimate rights and interests has instructed me to file a criminal case of defamation against her and we have already proceeded in that regard.”
And now, the case takes an even murkier turn, with Meenakshi and her lawyer filing a case against CINTAA. And here’s what Rizwan said, “I have also proceeded with a complaint against CINTAA before the Registrar of Trade Union and am seeking its dissolution on the grounds that the activities of CINTAA is ultra vires and illegal. CINTAA cannot arbitrarily act as a parallel Court and pass directives against third parties or act as a recovery agent.”
We then got in touch with the General Secretary of CINTAA, Sushant Singh, who said, “We’ll respond to this notice when the Registrar of Trade Union sends us a notice. We haven’t done anything that is illegal. And as for acting as recovery agents, why shouldn’t we? Isn’t it our job to take care of our members and make sure that they get their dues on time as promised?”
He continues, “Meenakshi Sagar is a habitual defaulter. Within the past 2 years, there have been 53 complaints against Meenakshi and Moti Sagar combined. During a Joint Dispute Settlement Meeting, Meenakshi had agreed on a set date for payment and even signed the paperwork. But she broke her end of the deal. So why will we not warn our members about not working with her?”
Speaking about CINTAA not consulting IMPAA over issuing the non-co operation directive, Sushant says, “We do not have any MOU (Memorandum of Understanding) with IMPAA, it is our prerogative to whether or not call meetings with IMPAA.”
We got in touch with Babubhai Thiba, the Treasurer and Chairman of Television Committee, IMPPA who told us, “The non-co operation decision is always taken by the JDSC (Joint Dispute Settlement Committee) which is between the producers association and the artists association. It is taken by both the parties and here, it was only CINTAA’S decision. We have written to CINTAA and we have already gone to the Competition Commission of India, that we do not want all these unions because they are doing dadagiri, stopping shoots, harassing producers and some people from the unions are taking bribes and hence, we have pleaded the commission and the judgement should come within 3-4 months. This decision has been taken before all this happened.”
Speaking up in support of their member Meenakshi, Babubhai continued, “We agree that Meenakshi has passed her deadline for the payments, but it is not her intent to NOT pay her actors. Her last two shows Sindbad and Jamai Raja did not really do well and she is running in heavy losses. We understood her situation and requested her to make the payments slowly and she was paying. It is not the case that Meenakshi has refused to pay her artists, it’s just that she is paying them gradually. She also informed us that she had payed 4 out of the 8 artists their full payment and the paid the remaining 4 artists part payments. Every business suffers a loss at times.”
Referring to the non co operation directive issued by CINTAA against Meenakshi, Babubhai said, “CINTAA should not have banned their members from working with Meenakshi Sagar. She is one of the regular producers and it happens in the production business. Number of production houses are delayed with payments. If Meenakshi was intentionally not paying her actors, then this step of CINTAA would have been right. But that is not the case here. So CINTAA shouldn’t have taken this step.”
Both parties (CINTAA and IMPPA) believe that the court will do them justice. Only time will tell…