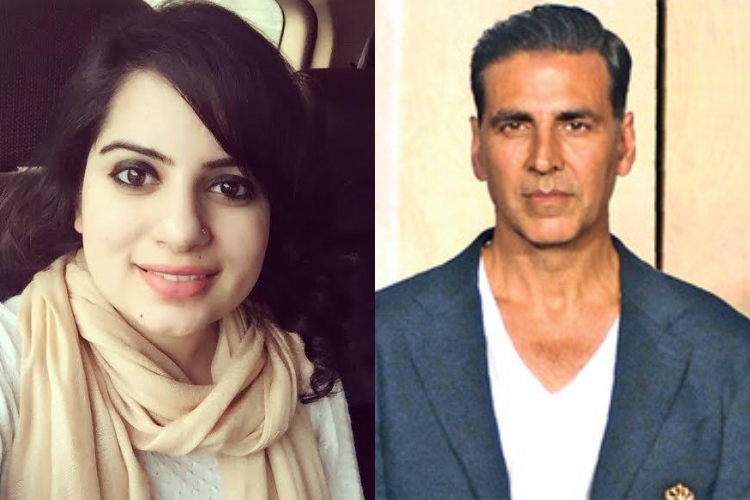 Comedienne Mallika Dua, who has hit out at Bollywood star Akshay Kumar for a remark aimed at her during a shoot, says she wanted to start a dialogue about etiquette at the workplace, where big shots often cannot differentiate between charm and harm.
Mallika took to Twitter on Thursday to post snapshots of an open letter, in which she has addressed the issue.
It reads: “Is Kareena Kapoor not entitled to speak about things because she played Chameli? Is Vidya Balan not entitled to speak about things because she did ‘The Dirty Picture’? The people who shame us for the characters we play are the same people who make it okay for a Bhupendra Chaubey to speak to Sunny Leone the way he did. Shame on you. Fortunately, you can’t stop us.”
A video has surfaced on the internet in which Akshay is seen saying “Aap bell bajao, main aap ko bajata hun (You ring the bell, I will bang you)” to Mallika during the shooting of comedy show The Great Indian Laughter Challenge.
While many came to Mallika’s support, many questioned the timing as Mallika is no longer a part of the show, which is aired on Star Plus.
Mallika says this isn’t about Akshay Kumar.
“This is about every big Bollywood star and every other big shot, who cannot tell the difference between charm and harm. This is about every big celebrity who thinks his colleague enjoys being grabbed by the waist and twirled without her consent.
“This is about workplace etiquette for everybody, men and women included, and about understanding the idea of professional communication so we don’t make someone uncomfortable in their place of work, unintentionally or otherwise.”
She said women are not the emotional fools most take us to be.
“I refuse to act on impulse and jeopardise my career for a race of crass alpha males with licences to make us cringe. It amounts to committing suicide just because every second person in the world is an asshole or not crossing the road because accidents happen.
“So yes, we are 100 per cent complicit in letting it pass, sometimes for our own sake,” said the daughter of journalist Vinod Dua.
Mallika says the remark was not the single most vile act of inappropriate behaviour.
“Was it the single most vile act of inappropriate behaviour? No. Was it enough to make one uncomfortable? Yes. Would the superstar be offended had someone jokingly said to his daughter, ‘Nitaara ji, aap bell bajaaiye main aapko bajaata hoon’? – Most probably.”
Mallika, who made her place in the comedy world through the digital world, didn’t put one part of the open letter on Twitter.
It was published by a popular webstite.
It read: “What stayed with me was why and how is that statement a joke, and why was it necessary to crack that one with a colleague? I also wondered why the same joke wasn’t directed at my co-mentors Zakir Khan and Hussain Dalal. I shrugged and went back to work, like women generally do.”
The issue comes at a time when there is a clamour around sexual harassment in showbiz after Hollywood producer Harvey Weinstein was named by multiple actresses and models for rape and assault.
What do you have to say about this entire fiasco?